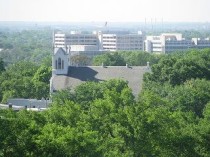 Located on 400 S. Pine in historic Oregon Hill, Pine Street Baptist Church (PSBC) has remained a fixture in the Richmond area since its founding in 1855. After a revival at Grace Baptist Church in Windsor Farms, the congregation decided that it needed a place of worship in the Oregon Hill community, since many parishioners made the trek to Windsor Farms two or three times a week. The location moved around various locations in Oregon Hill until they were able to build their current church on Pine Street. PSBC has remained on Pine St. since 1882, with additions to the church building being made in 1925.